How to Use Twitter to Increase Mobile App Downloads

The most successful mobile startups solve a problem for a particular audience, and 7 out of 10 times that audience is quite ‘niche.’

As a great example, one of the major trends currently dominating the tech startup market is health and fitness, with apps designed for small niches including bike riding, personal training, running etc.

Now, this can present a massive problem for Australian startups if you want to keep your app domestically focused. The Australian market is absolutely tiny!

With a population of only 25 million, you’d be super lucky to penetrate a market that can deliver the ROI you need to really make your app fly.

This is where you need to think ‘global.’

You’ll most likely find that North America and the UK have similar markets to Australia, presenting an opportunity to reach larger markets than what you can in Australia.

How can you possibly target a global market, understand their needs and interests, and offer them something they need, without flying to the other side of the world?

You guessed it! Take your marketing campaign online!

You may have read a few weeks ago – How To Use Facebook To Increase Your App Downloads.

How To Use Twitter To Increase Your App Downloads.

Whenever I ask someone if they’re on Twitter, 9 times out of 10 they’ll look at me puzzled and ask “Does anyone even use Twitter?”

And the response makes complete sense, there are only 2 million Twitter users in Australia, compared to 11 million Facebook users.

For you’re average Joe, Twitter in Australia is pretty much irrelevant. Facebook is the obvious go-to strategy.

But Twitter is considered the number 1 Social Media platform in the USA, Canada and most of South America.

The USA alone has 5 times the amount of Twitter users than the Australian population!

By reaching out to international users on Twitter, you’ve already expanded your market reach by millions.

These stats speak for themselves and it’s the very reason we’ve put a lot effort into building and engaging our own Twitter audience.

In this article, I’m going to walk you through the steps you need to follow to generate Twitter campaigns that are guaranteed to increase your app downloads.

To sign up, simply enter your name, email address and create your username – which should just be the name of your app.

Make sure you customise your Twitter account by clicking the ‘edit profile’ button in the top right hand corner and have images made specifically to match your app’s design.

It’s important that your brand is consistent across all channels and platforms.

Don’t get caught up in the ‘trending’ hashtags of the Twitter world and write Tweets just for the purpose of getting follows and re-tweets.

Tip: If you’re in the auto-motive industry, don’t be tempted to ‘tweet’ about Kim Kardashian just for a re-tweet.

You need to make sure that your content is relevant to your target audience.

This is when you will build a quality audience, with greater conversion rates and respect in the industry you’re trying to disrupt.

The more meaningful your conversations are with your followers, the more likely they are to download your app. <Tweet>

Running competitions creates a buzz and an incentive for people to engage with your app.

For example, quotes often go viral on Twitter and are a fantastic way to communicate your brand values and build an audience of followers who have the same values.

4. Reach out to your existing networks and influencers.

A great idea is to also reach out to influencer’s in your niche, ask them if they will give you a shout-out or re-tweet your content.

Most importantly, be an informer, not a me-former. Informers get 2x more followers then me-formers.

Now that you’ve started to build a quality Twitter following, you’ll want to ensure that your followers find value in what you’re sharing.

Use these points to successfully engage your followers:

What we talk about a lot of Buzinga is finding the ‘lowest hanging fruit’ or the most effective way to reach your audience for the lowest cost.

A lot of the time this is why we end up suggesting social media campaigns as the most effective form of paid advertising.

After-all, it’s where your audience most likely spends the majority of their time.

The number one goal when starting a new campaign is to increase revenue.

In terms of your app, this means increasing downloads and retention rates.

When designing your campaign, you want to have a clear plan that you can implement on an on-going basis that is proven to convert customers.

You need to think long-term with every campaign you create.

Framework For A Successful Advertisement – The AIDA Acronym

Attention – How will you get the audiences attention.

Interest – What about your ad is actually interesting.

Desire – You need to convince your target audience that your app is worth downloading.

Action – Guide your customers to a call-to-action. Twitter has a number of Call-to-action options for you to utilise, but what you will use is ‘Get Installs of Your App’

2. Make sure you know exactly who you want to target on the Twitter platform.

Since Twitter is the largest Social Media platform in North America (who are considered a ‘similar’ market to Australia) this gives you the opportunity to reach global audiences and build a market that you cannot build in Australia.

Remember, the Australian market is tiny, if you want your app to be a huge success – you need to be thinking globally.

Don’t forget: Tweets with images render 2x more engagement than those that don’t! If you can’t create them yourself, it’s worth getting someone else to.

What is the point of having a campaign if you can’t track your return on investment!

Twitter makes this really simple, you can activate conversion tracking to see measure how effective the campaign has been in terms of downloads and engagements.

This will provide you with campaign reporting on important metrics like app installs, user sign ups and other actions people take in your mobile app.

Building Your Ad Step By Step

Reaching your target market has never been easier thanks to Twitters App Installs or Engagements. 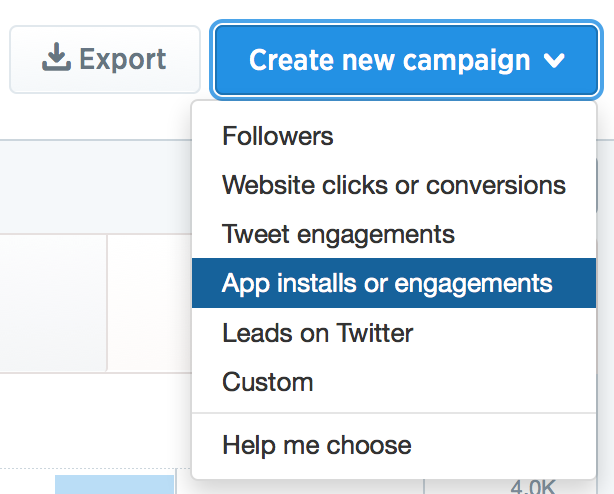 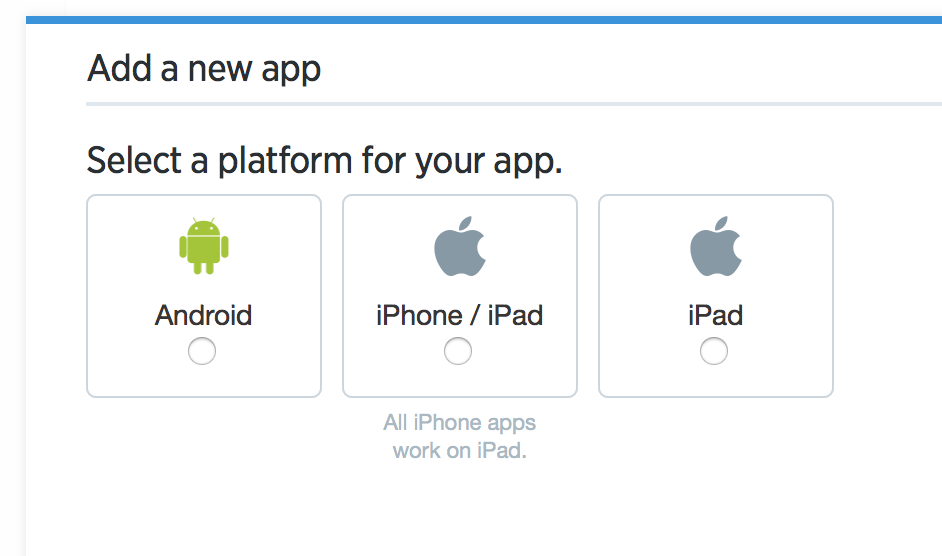 3. Enter the AppStore URL for your app. 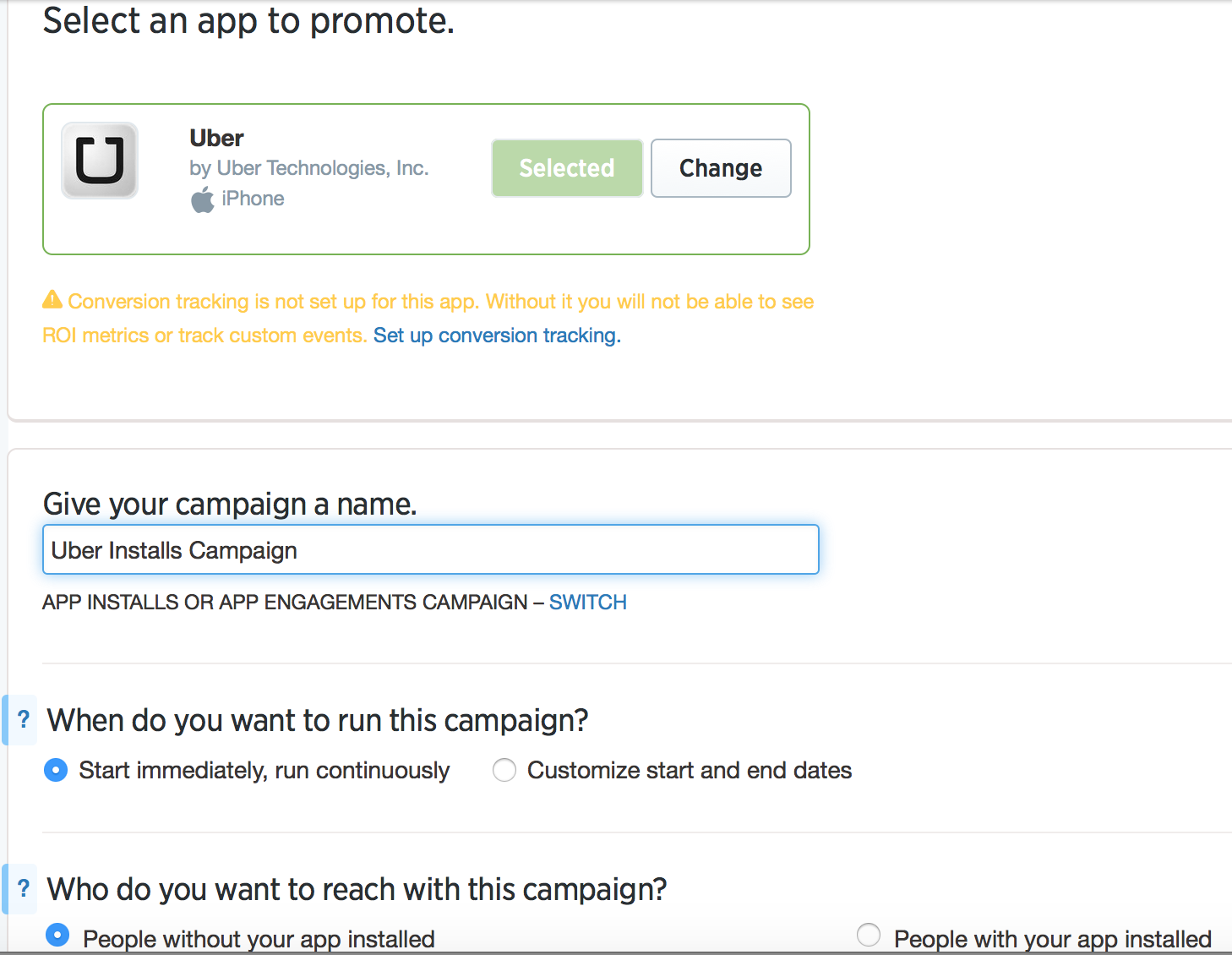 Building Your Advertisement Consists of 3 Parts

For your first few campaigns, I would suggest testing 5 different images with identical copy to see which image is the most effective.

Once you have honed down which images are most effective, start testing various copy.

It’s most likely the images that will effect your download rate.

Twitter offers a range targeting mechanisms to reach the right users at the right time.

You can use any of Twitter’s primary targeting types to target users including:

It’s unlikely that your campaigns will be profitable from the moment you launch them.

Set aside a budget that will help you get started testing the waters and collecting data. 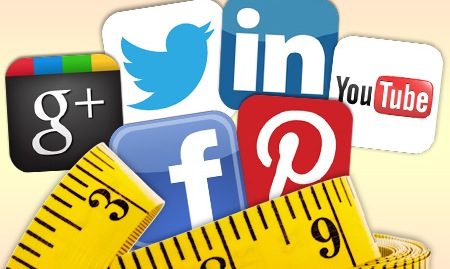 A digital campaign is nothing without measuring your return on investment.

Taking full advantage of Twitter’s campaign dashboard is the best way to manage, tweak and track all your engagements.

Here you can test different cards and tweets to see which receive the most engagement and how much they are costing you.

You need to know how much money you’re spending per app download.

Hack: This number should never be more than $2 as an industry standard. But you want to get your cost per app download as low as possible. $0.30 would be the ideal situation.

The campaign dashboard also helps you to test, learn and optimise each ad to produce the best results at the lowest cost.

Don’t expect your first Twitter campaign to be a huge success, only after testing and understanding the metrics can you truly harness the full potential of Twitter.

Do you have any tips for how to increase your app downloads using Twitter?

Katelyn has nearly a decade of experience in sales and customer service management. Working with some of Australia’s leading brands, she understands from the front-line the fundamentals of creating a successful marketing strategy to attract and retain loyal customers; a key goal for the launch of any new app.

https://www.buzinga.com.au/wp-content/uploads/2015/03/twitter-ads.png 359 918 Katelyn Duckworth https://www.buzinga.com.au/wp-content/uploads/2017/06/Buzinga-Logo-Old-Small.png Katelyn Duckworth2015-03-18 05:55:042016-07-21 13:15:32How To Use Twitter To Increase Your App Downloads
"Buzinga have added enormous value, partnering with all through all the challenges of building a custom application." - Ben Scollary, IT Innovation, Bluescope.

21 Tools For Marketing Your Startup
Scroll to top